Constant danger. Safe return doubtful. Honour and recognition (only) in case of success.

– Ad placed by Sir Ernest Shackleton seeking a team of men to join him on his expedition to make the first crossing of the Antarctic.[1]

Then he envisioned a paradigm shift in line with the organization’s mission of Shaping Future Leaders through Music. He invited his 100 musicians to go on a personal and collective journey and three quarters of them joined. Each orchestra member, irrespective of age or level of experience, would be allowed to explore the musical, psychological, emotional, physical, and spiritual challenges that face a conductor.

Zander believed that this would help them grow as musicians, learn to listen differently, and come to understand how each of their parts fit into larger musical and organizational constellations. To him, a journey into the unknown at a time when the world is living each day in the unknown requires transformational thinking at every turn. It requires, what Rosamund Stone Zander’s book “Pathways to Possibility: Transforming Our Relationship to Ourselves, Each Other, and the World” describes as acting out of optimism and resisting the temptation of despair.

How do you build an orchestra of conductors?

Everyone and no one is the first chair. The first chair is the leading instrumentalist in the band, musical ensemble, or orchestra (the German Konzertmeister), the most significant leader after the conductor, and the de facto conductor if he or she is absent.

Different times call for different skills. Zander asked all orchestra members to prepare a fast piece to demonstrate their virtuosity and a slow piece to show how to shape a phrase, coax a gorgeous sound from an instrument, and communicate their love of music. He believed that such focus would be welcome after a long, frustrating, pandemic summer.

All prepare excerpts from the orchestral repertoire. Zander prepared a detailed study sheet for each excerpt (providing some background, stories, emotions, discussion of tempo, anecdotes, as well as recordings of different performances of each excerpt), and presented them in such a way that they would likely be of interest to the new group of “conductors.” This gave young musicians a broader understanding of the orchestra, from a perspective other than their own. In parallel, they practice their instruments and piece.

Learn to listen like a conductor. Listening is key to great orchestral playing, as it is in relationships, organizations, and society. Under normal circumstances, musicians might have little interest in the excerpts of any instrument other than their own. But the challenge is: how can you listen well when you don’t know (or understand) what the other sections of the orchestra are doing? To address this, orchestra members demonstrated their excerpts-the rest listen, aware of each detail, every challenge that conductors face, and came prepared to jump in and offer coaching and advice-just as conductors do. Teaching can be the best form of learning and understanding.

Commit to a different practice. For it to succeed, the project requires engagement, cooperation, enthusiasm, good listening, curiosity, energy, and open-heartedness, which are all essential characteristics for a conductor-and a leader. “If you are game to join,” Zander told his musicians, “I want you to go ‘ All IN.’ This is an experiment that depends for its success on the kind of partnership and interaction usually found only in self-directed chamber ensembles.”

Zander, masterfully communicated a fundamental framework. A leader is responsible for three things. First, providing some level of predictability to the team. This could be as simple as reminding the sections to bring their own parts up to a proficient and comfortable level so that they can pay attention to others around them.

Second, providing observable leadership and direction. Even in flat organizations, someone is in charge. Teams want to be led and led well. The conductor is the leader. Finally, there must be communicated how the activity being engaged in is fun. Teams want to participate in “Cool Stuff,” explains Zander.

How can we use this approach to marshal the courage to effect change in society?

Much like Shackleton, Zander struck a cautionary tone to enroll his team:

The challenge of the new world in which we find ourselves is calling on resources of courage, ingenuity, and, above all, optimism that we have never expected to demonstrate. But meeting this challenge will be part of the training that this journey is going to offer to all of us. It is going to require a commitment to engage and persevere way beyond simply showing up. So, far from discouraging you from joining this venture, which is so different from what you originally signed up for, I am asking you to think about whether you are willing to participate “on the court,” rather than sitting in the bleachers observing the action below.

As Zander was making his plea to his students, the Black Lives Matter movement forced many of us down from our bleachers to see the world from different vantage points. Like an orchestra of conductors, we started to understand the transformation that could occur in us, in others, and in the system if each of us took responsibility for the whole.

Social movements tend dehumanize the forces they oppose as “the system”-but the system is us. As the adage goes, no single raindrop ever thinks that it caused the flood. Changing this perspective requires us to go “all in.” Every vote, voice and part counts-also, and sometimes especially, the ones from a different score. 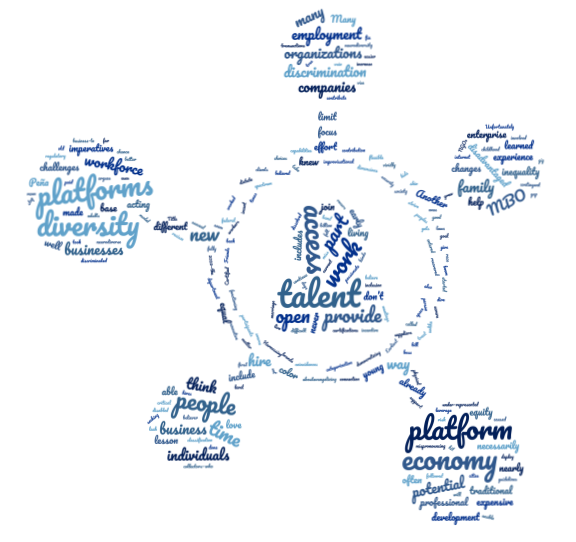